5 COMMON VIDEO MISTAKES AND THE SOLUTIONS

5 COMMON VIDEO MISTAKES AND THE SOLUTIONS

Over the next few weeks, I’m going to go over five common mistakes I see non-professional video people make. With the image quality of current iPhones and Android phones, not to mention tablets, there’s really no reason a business owner can’t jump in and see the benefits of adding video to their websites and social media pages.

There are two broad aspects to creating engaging video: Technical and Creative. As a video production company, we are constantly updating our gear, but that’s not what I mean by technical. I’m referring to the technical aspect of actual shooting. Here are the five that we’ll start with:

Framing refers to the placement of your subject within the frame of your imager, in our case a camera recording video. The weakest framing is to put the subject in the dead center of the frame. I see this in a lot of amateur videos. A visually stronger placement comes from the rule of thirds. 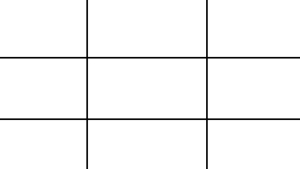 Divide your screen into 9 equal sections, 3 lines across and 3 lines down. The point of intersection of the upper lines is the best place to put the eyes of your subject. Why eyes? Humans look at the eyes first and the longest when communicating. We read emotions, intent and credibility in the eyes when a person speaks. 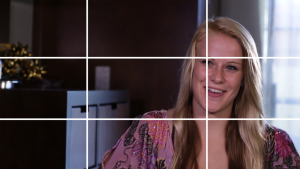 Even if the subject is not human (such as products or a location), placing the subject at those intersections is still visually stronger than in the dead center. The rule of thirds also allows for placement of graphical information, photography, additional video, etc.

Interview framing can be broken down into two subsets: Off Camera and To Camera. Interviewees typically look just off screen as if speaking to the interviewer. For a video in which the interviewer is heard, it may make sense to see both the interviewer and interviewee via cutting between the two (but don’t cross the line – more on that in a later blog). Looking slight off camera also allows the subject space to look into, but still feel like they are within the frame. Sometimes, in avant garde documentaries and creative independent films, the subject is placed on the 1/3 line but is looking out of the frame for a specific effect or story point.

For videos dealing with heavy subjects (such as for non-profits) or with comedy or any topic in which a direct connection or emotion is desired, having the subject look directly at camera may be more effective. The rule of thirds still applies even if the subject is looking directly at the camera. 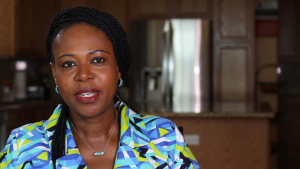 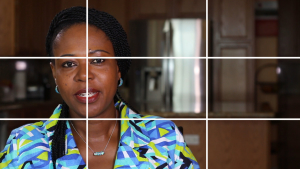 Varying frame size can also strengthen the visuals in a video. If you are making a video, you are forcing the viewer to see what you want them to see in order to convey a specific message or story to achieve a specific result. You can do this to great effect by changing the frame size according to the goal of the shot. Here are some basic frames types and in general what they are used for:

WS: Wide Shot: Also known as an establishing shot. Used to orient the viewer so that when closer shots are used, the viewer understands the relationship between the shots.

MS: Medium Shot: Can be used to convey expository information, give the viewer an overview or show a transition from one thought/location/subject to the next.

CU: Close Up: Can be used to focus the viewer’s attention on specific details of the subject. May also be used for emotion.

ECU: Extreme Close Up: Typically used for emotion and focused on the eyes and maybe mouth. This is sometimes used in investigative shows on the “bad guy”. May also be used for a very specific detail.

Knowing when to use each frame size can be difficult while you are shooting, so it is best to shoot a variety of these sizes and make the decision when editing as to which size shot will be the most effective. This is often referred to as “shooting coverage.”

NEXT BLOG: Lighting: What Is Done Wrong and The Easy Way To Do It Right.

To produce effective messaging media inspiring action for our clients.

Our work puts clients at the top of their market by telling stories: about their people, their companies, their products and services.

You did an awesome job.  We are all very happy with it! Thank you, so much.

Great video. We want to take it to China with us.